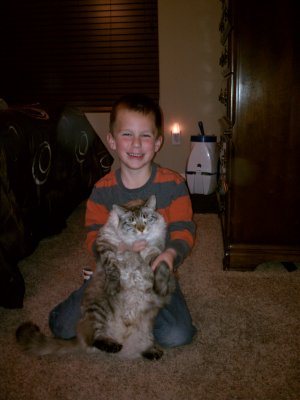 Ercole came to us in December of 1997 by way of the Bakersfield SPCA, and quickly became part of our family. He was as sweet as kitties come and was great with children. His favorite little boy was Michael. They played together, ran together, and even became roommates. Nicknamed “Mow Mow” by Michael, Ercole quickly learned his new name ~ especially where treats were concerned. He was extremely devoted, loving, kind, and even became our own personal “watch kitty”. Mow Mow went to kitty heaven after a short illness on February 5, 2013. He will be missed and remembered by all as the coolest kitty we had ever met. We love you Mows!!