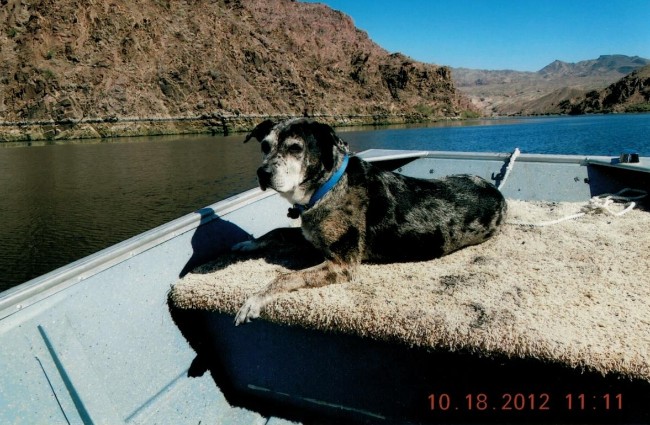 This is a story about Levi Millington who was a male Catahoula Leopard dog who was born around 2003 in Louisiana and sold to unknown wild pig hunter in Bakersfield. My grandson hunted with him and when Levi didn’t hunt the way he wanted him to he was going to put him down, now my grandson liked the dog and didn’t want that to happen! So the long and short of this he traded a pocket knife for Levi. Now the grandson his brother and a couple of other young men hunted wild pigs and of course Levi went with them and they all became very attached to Levi. One day a wild hog attached the other grandson and Levi intervened and took him out saving the boy from getting a good mauling and possible death, Levi sustained several major injuries but recovered from them. Now Levi had never lived indoors so was not house broke and the grandson had no place to keep him and I was looking for another dog so we took him witch was the best thing I ever did. He never in all the years we had him did he have any accidents. One day while we had him out running a pack of coyotes tried to run him to ground so they could kill him, well now Levi was one very tough dog and in very good shape, they chased him around for about 20 minutes and they could see he was going to get them before they could do him in and they all took off. Levi loved people especially baby’s we never had to worry about him hurting anyone or jumping on another dog unless they stared it. He was one very tough dog. All the young men that hunted with him ask how he is and are sad when we tell them he is gone.

Now I hope when we get to the Rainbow Bridge Levi will be there waiting for us.